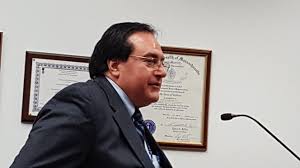 Andrew Vanni is a candidate for Ward 8 City Councillor

These are Andrew Vanni’s answers to questions that Malden Votes sent to all candidates. Andrew’s responses have not been edited or abridged. This is the PDF version of these answers.

What is your vision for Malden?

What experiences have prepared you to serve on the city council?

I have worked in municipal government for over 20 years. I am currently a Finance Director, I have worked for several communities and have made them Financially stronger.

Over the past four years, what actions of the city council did you most support or oppose, and why?

The quality of our cities water is one of the poorest in the Commonwealth of Massachusetts. When elected to the City Councilor I will focus on removing our lead water pipes and improving our cities water quality.

Which social issues do you care about, and why? How would you advocate for those issues?

I believe in equality for all. I will do what it takes to see that everyone is treated on a level playing field irregardless to race,color, creed or sexual orientation. This country was founded on that all people are created equal.

What concrete steps can Malden make to address our environmental challenges, whether global or local?

Try to pass laws that remove plastic from our city. Plastic takes thousands of years to break down.

Malden is a diverse city with many marginalized communities. What initiatives would you implement to support these communities?

Diversity is great thing every culture brings something to the table. I would be engaging in these diverse cultures and see that they are treated fairly.

What are your long term plans for expanding tax revenue?

I don’t agree with increasing revenue. I believe in looking for and cutting wasteful spending.

Would you implement any changes around our city’s parking systems?

I believe that downtown Malden should have a free parking zone. People should not be penalized for doing business in Malden.

Some infrastructure challenges that face our city are degraded roads, lead pipes, and gas leaks. What initiatives would you implement to address these issues?

Start working on removing the lead pipes what use for water is most important.The roads and gas leaks should also be addressed. These problems come from years of neglect. The City should adopt a capital spending plan and stick to it. Like I have done in other communities.

What do you think should be done with the Malden hospital site?

I think we should try and put another medical facility at the site. The City should approach some of the larger hospital in Boston and have them create a satellite facility in Malden.(i.e. MGH)

Now that Massachusetts has legalized recreational marijuana, would you encourage dispensaries in Malden? What would you do with the revenue?

Yes I would encourage dispensaries in Malden it would be a great source of revenue without much pain. The residents who decide to use marijuana will go to other cities to make their purchases if we don’t have a dispensary in Malden . Why should Malden miss out on this revenue. The money can be used for our repairing our roads and infrastructure.

What is your vision for promoting civic engagement and increasing voter turnout in our city?

By creating more Cultural feast and by honoring diverse cultures.

How can we increase citizen engagement in city council meetings?

The City Council should make it easier for individuals to be heard. They should create a time slot at the City Council meeting for Malden Citizens to speak. (in other words encourage people to express how they feel) Many of the City Councilors pass laws on the way that they think and not of the thoughts of there voters.

Everyone grows up holding personal biases. Please share an anecdote about a time that your own biases were confronted, and how you responded.

I can honestly say I have no biases, as a child I face prejudice against me. I know how it feels not to be like based not on anything you did, but not coming from the right ethnic group. Also I know that people have stated that I have committed a crime. I have not committed crime. To commit fraud, money has to be taken. I haven’t taken anything that didn’t belong to me. However they should be watchful for they are committing a civil wrong Defamation of Character. People can be sued for this, and it is not pretty.

Click here to see all the responses to the Malden Votes questionnaire.